Were there any two names more evocative than 'Dan Dare' and Jetex' for the technically-minded 1950's schoolboy?  I can't think of any.

Peter Cock of Wilmot Mansour (Jetex before it was taken over by Sebel)  designed this shapely model in (I think)1953/54. 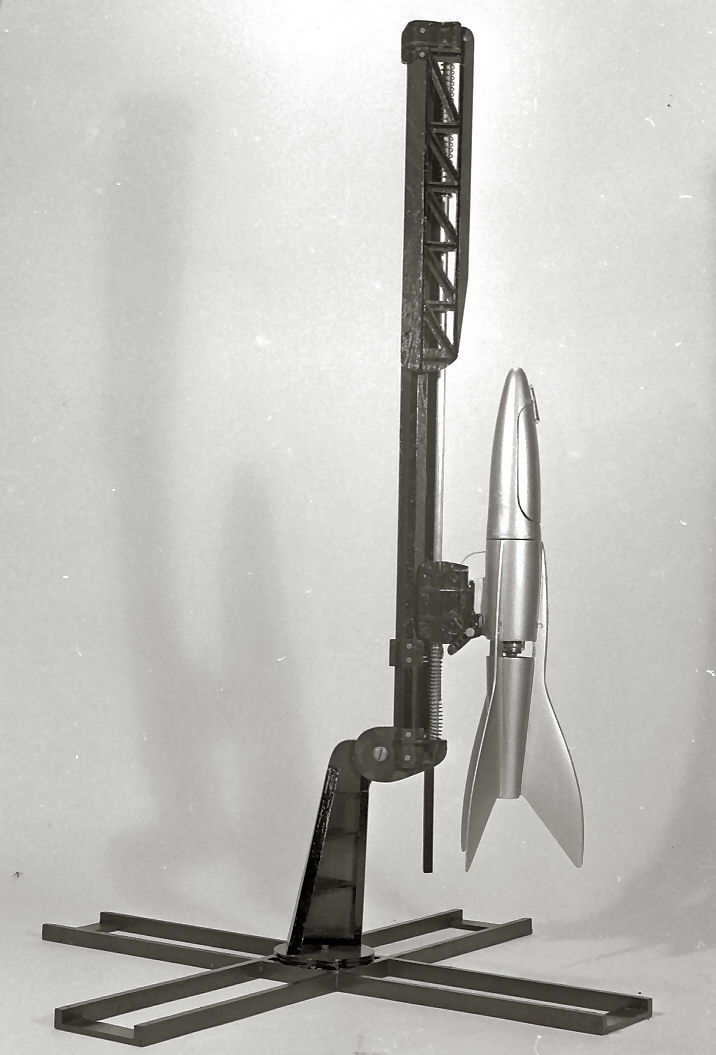 Above: Jetex Space ship on display, and on its fearsome spring-loaded launch pad.  (Both photos from Mike Ingram's archive). 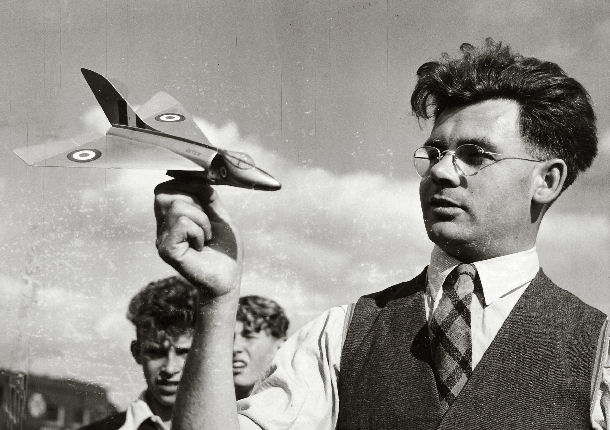 Above:  One of Jetex's most brilliant designers was Peter Cock.  This photo from the 1950's shows Peter at one of the many meetings where Jetex products were demonstrated.

Peter, seen above  with his equally famous Interceptor, told me he built three prototypes of the Spaceship to make sure it worked properly.

The body was moulded balsa sheet, a feature of the Jetex 'Tailored' models. The scary plywood catapult was designed by Joe Mansour himself.  All in all, it was a pretty complex model and an expensive kit (more than a year's pocket money) at the time. It  was powered by the newly developed Jetex '50R': 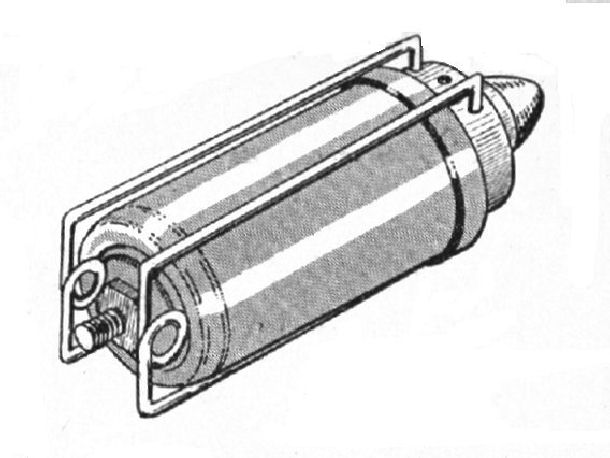 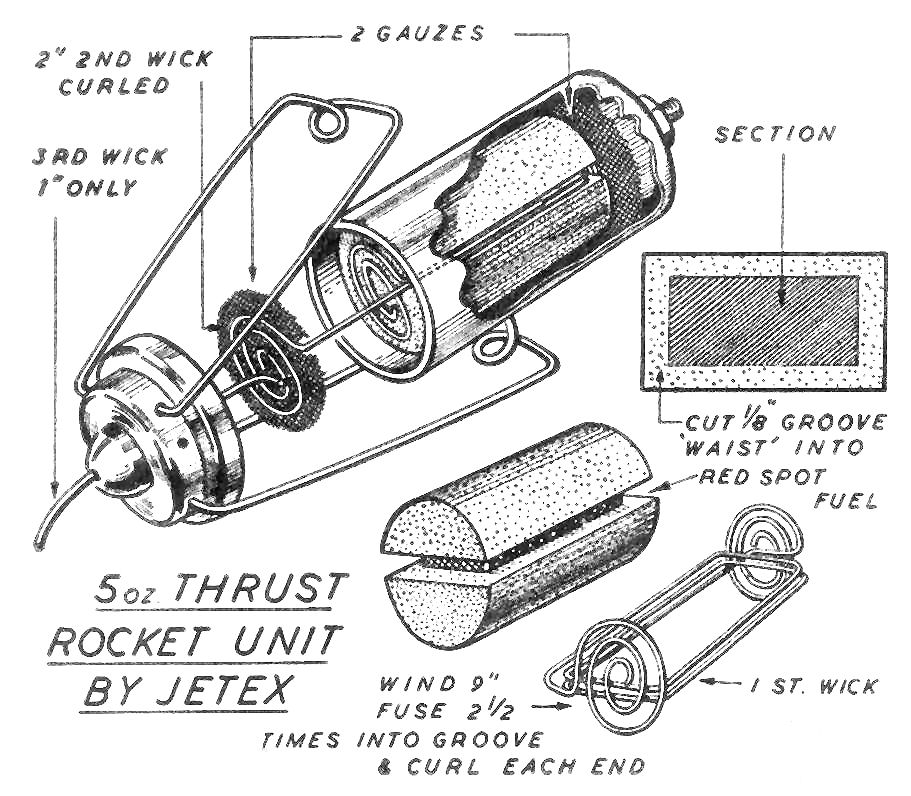 As long as this was properly loaded with grooved pellets and a yard (1M) or so of fuse, it could deliver about  5 oz ) thrust (about 1.5N for up to 5 seconds.

This was enough to propel the spaceship to a couple of hundred feet before the spring-loaded catch opened and the parachute was ejected. 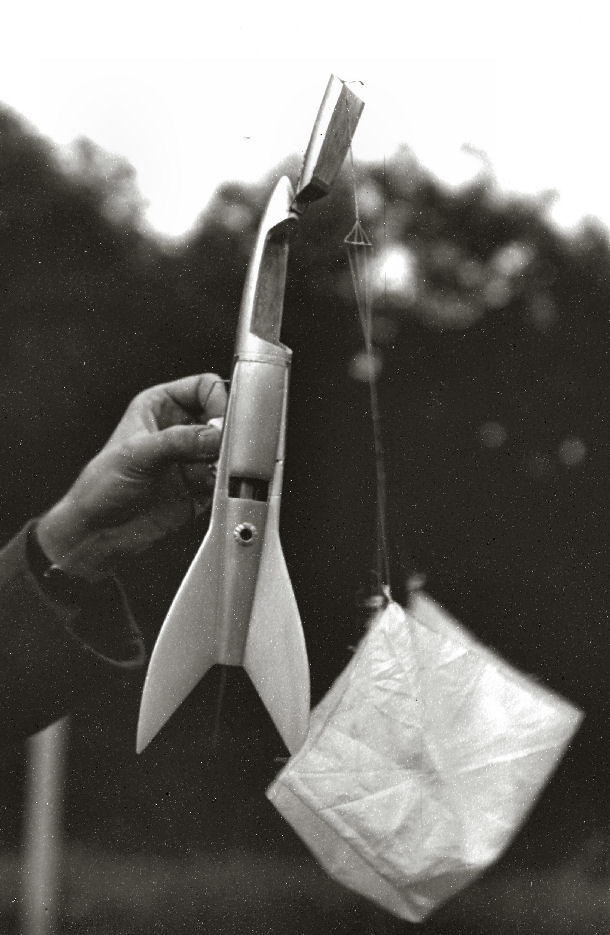 Above: The catch opens and (hopefully) the parachute comes out.  In its review, the Aeromodeller was highly impressed with the quality of the kit, but thought it was one for 'experts only'. Eagle, as will be explained below,were not impressed.  Or amused.

There is more about the Spaceship's history at:

When the Spaceship was first marketed, Jetex  associated it with Dan Dare, the astronaut hero of that wondeful boys' comic at the post-war years, Eagle:

However, Eagle for some reason objected to the appropriation of Dan Dare, its 'Pilot of the future'.  lawyers were called in, litigation was threatened and, not without great regret, all reference to DD was removed and Dan Dare had to be content, for the time being, with his Sondar-designed Anastasia.  So the box most modellers associate with Peter Cock's wonderful creation looks like this:

Which is how it appears even in a recent AeroModeller.  An original box has proved difficult to track down, so I was delighted to receive to receive high quality scans of a Dan Dare  box from Robert England (thank you, Robert).

Robert's father had been a printer in the 1950's and had kept these test printings in his garage for over sixty years.  They only came to light when Robert was clearing his father's house.The quality of these prints is amazing, here is Robert's scan of the original box top for comparison to the bowdlerised version above.

I am thrilled Robert's father (blessed be he!) thought to preserve these unique artefacts, and, calling upon all my skills in Paintshop pro, I have now prepared a montage from Robert's excellent scans: 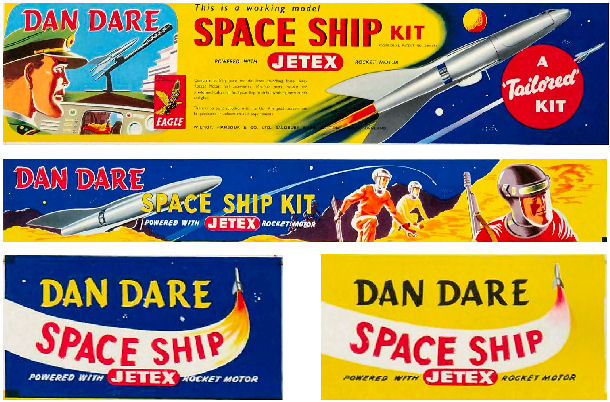 Printed  in glorious Technicolor and suitably mounted, this work of art will make a grand addition to any Jetex enthusiast's workshop.  It can be printed (on quality photo pape)r at either A3 (recommended) or A4.

Please tell me if you would like a copy, which will only cost you only 5 GBP (cheap) to cover printing, and 3-6 GBP postage  (expensive) depending on where you live.