2021 has seen the most widespread marketing of miniature, sustained thrust, solid fuel reaction motors since the days of Jet-X. And about time too, that was in 1986. For this we have to thank Piotr Tendera who has taken on significant expense and effort to get the CE mark for his Tendera motors. And while it might be argued that this has resulted, due to the mandated use of the wider green fuze, motors with a lower overall Specific Index. But, for myself the widespread availability of the CE marked motors is a price worth paying. Already we are seeing signs of interest from people who are outside the usual demographic of the vintage modeller. I expect to see some novel and interesting Tendera powered creations appear over the next months.

Additionally, I think, we are likely to see the most interesting developments using the larger of the motors in Piotr’s range. The L3 and L4 both offer some new possibilities and on these fronts I’ve been making (rather slow) progress.

Radio Control is of course one possibility. Indeed, one of my correspondents from here in Germany (Frank Schwellethin) has been flying R/C with the more usual short duration motors from the Estes range and he will now, I think, have a go with the Tendera type.

Frank sent me several videos of his R/C rocket gliders in flight and inspired I was moved to complete a Klima Me163 and fit it with an Tendera L4. (This is intended for a D3 model rocket motor.) I haven’t had the chance to fly it yet as I’ve been awaiting the delivery of a miniature receiver, a Lemon Stability + from the USA. This, as its name suggests, is not just a receiver but it also includes additional hardware to build in a modicum of pitch and roll stability. 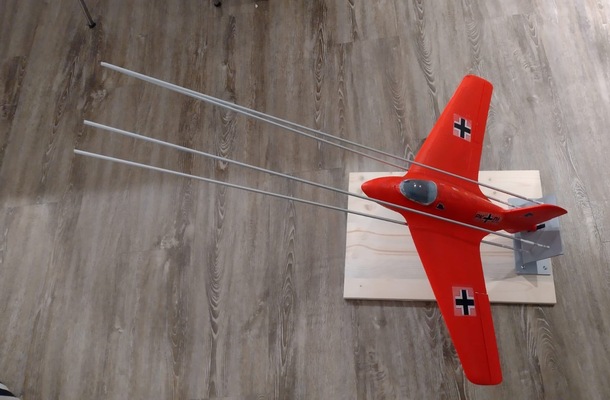 Electronic stability is the second possibility and it has long been an interest of mine. Since I started hardware that weighed over 50 Kg can now effectively be replaced with modern electronics weighing just a few grams. Luckily for me, the principals, and the maths, remain the same.

Now R/C receivers such as the Lemon and the Spektrum SAFE range include the ability to re-establish hands-off level flight at  almost no additional cost.  And configurations such as quadcopter, that have no inherent stability, and even helicopters without the stabilising fly-bars are feasible. But what about fixed wing free flight and specifically scale, reaction powered flight?

Seeing a recent copy of the Aeromodeller I feared that once again I'd prevaricated too long. The byline, ‘Low wing FF stabiliser’ caught my eye. The article, by Steve Glass, sounded something like  what I had in mind. In fact  Steve is using an add on stabiliser, the A3S3,  designed to work, downstream as it were, from a conventional RC system.  Steve has added some circuitry to simulate the pulse stream from an R/C receiver and, it must be said, this is pretty much purely a wings levelling system. What I have in mind is something more specific for reaction power. Additionally, the A3S3 has a setup facility that must be installed on a PC or mobile phone. Not, I fancy, something that will find favour with everyone.

For me what is required is something that can be set up on the flying field. The user can set the glide angle manually and adjust the rate of ascent. The controller consists of a solid-state gyro accelerometer board, a micro controller, battery and two miniature servos.

One would go to the field with the model with controller installed, switch on and first sort out the power off glide with a used motor installed. When this is satisfactory, select (guess) an angle for power-on ascent. This could be done by holding the model at the desired pitch angle. This is saved in the controller with a button press.

The model is then loaded for powered flight and hand launched with the motor building up thrust.

The controller detects an X axis acceleration from the thrust which it can integrate to approximate airspeed. The appropriate pitch up is wound in on the elevator/elevons. (The board would need to be capable of managing elevator and ailerons or elevons). Perhaps a potentiometer is used to preset the power on flying speed. The controller would start to wind in pitch once this airspeed is achieved.

We should now see the model climbing to best altitude. The controller detects the end of the thrust phase and changes the pitch trim to that for best glide. We might also have a gentle turn trimmed in!

Sounds simple and maybe all this is justified as a means to achieve that perfect scale, no dihedral, rear mounted motor Lockheed U2.

But what class of model would this be? It’s not R/C, it’s not C/L and its not quite F/F either. I leave that philosophical question as an exercise for the reader. 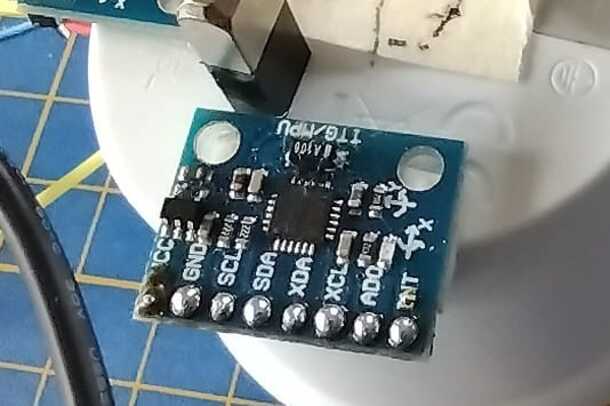 Looking forward to doing some flying in 2022.