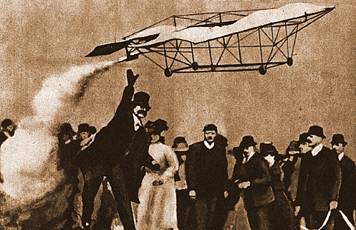 First of the Flaming Flyers

A newspaper report of the time described him as "a tall man with a bushy walrus moustache, resplendent in top hat, frock coat and pin-stripe trousers".

Mr Thomas' model was described as "a weird contraption [...] not unlike an eccentric box kite".

As Dr Roger Simmonds, the source of this little-known footnote (or headnote?) to Jetex history, notes, "However, the model has some notable modern features, with plenty of wing area and adequate down thrust to cure excessive looping. Alas, the flight pattern is also all too familiar." As the newspaper report records:

Thomas launched the model into the air. With an impressive roar from its twin rockets it sped swiftly through the air, climbing steadily as it flew, but then disaster struck. It suddenly began to show ominous signs of instability, and a moment later it had dived into the ground so violently that it became an utter write-off.

Dr Simmonds adds: "The need for expert and careful trimming is obvious. Readers might like to know that the premier award winner at this particular model aircraft meet was A V Roe, flying an elastic-powered canard biplane."