Intro:  My previous blog on this subject was about the use of asbestos in a Rapier mount to see if this would prevent a model being damaged in the event of a Rapier case burn through.  Experiments showed (you will remember) a mount with two thicknesses of asbestos proved ineffective.

The  need for a robust motor mount was made even clearer when I tested a batch of Rapier what turned out to be L-2 LT motors: 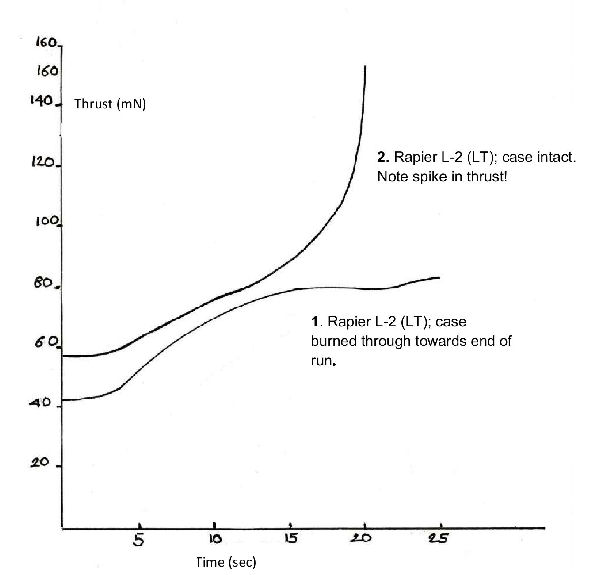 Above: the thrust is adequate for a light model; however, there is a thrust spike towards the end of the (very nice 20 sec plus) burn time.  The cases of two motors burned through at this point,  with enough heat and flame to damage a model.

I wouldn't put one of these motors in a model, and certainly wouldn't provide them to even a brave modeller!

Following previous blog, I was contacted by Rob Mcconaghy, who suggested a ceramic or metal mount would resist the heat of Rapier propellant.

In the first instance, Bob offered to make some metal tubes of various aluminium alloys and one of stainless steel that I could test with Rapier L-1 and L-2 motors.

Rob was as good as his word, and a few days ago some beautiful tubes arrived by post: 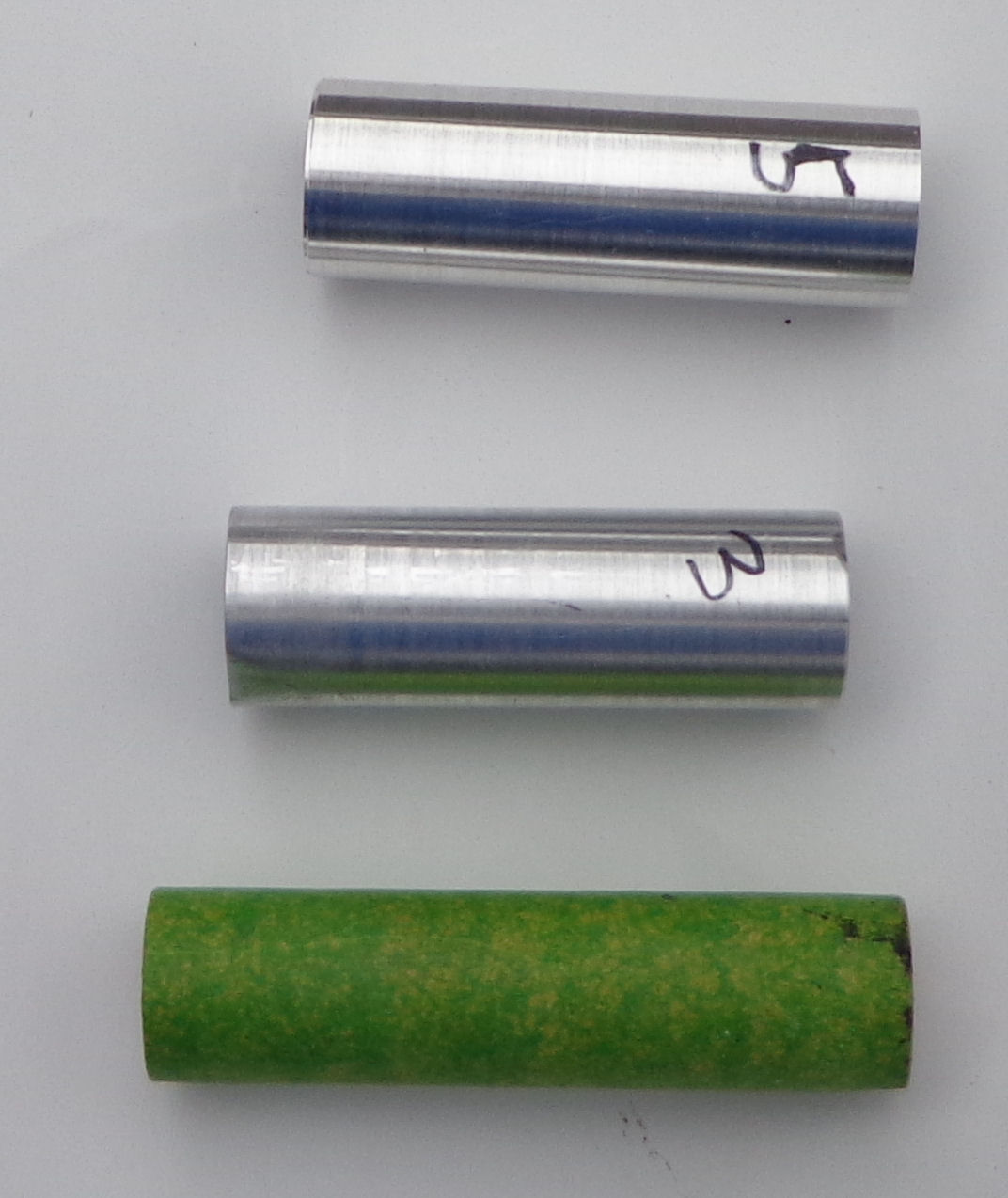 Above: these alloy tubes are sized for L-1 and weigh only 0.6g.  Those for L-2 were larger: those made of alloy weighing 0.9-1.2g, the stainless steel one weighed in at 2g.

And very beautifully machined they are too  It almost seemed a pity to test them!

I first tested the stainless steel tube with a standard L-2.  This had a small 1 mm hole drilled through the case to ensure  a 'blow-out': 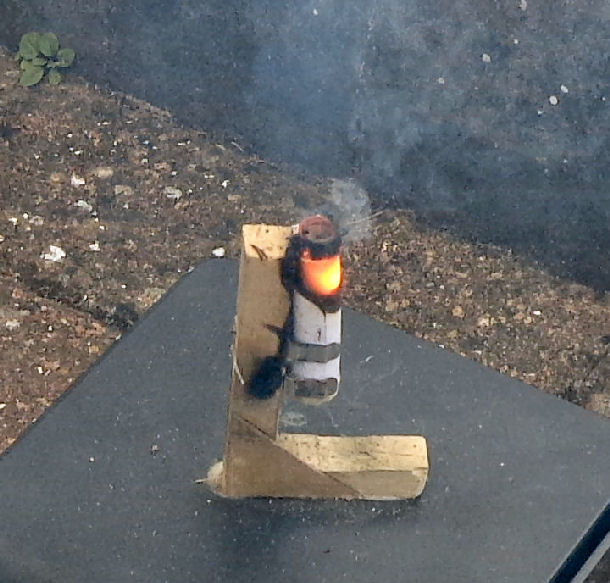 Above: We have ignition! The tube glowed red-orange but did not burn through and the model would have been protected.

I repeated the experiment with one of the suspect L-2 LT motors.  The tube remained intact: 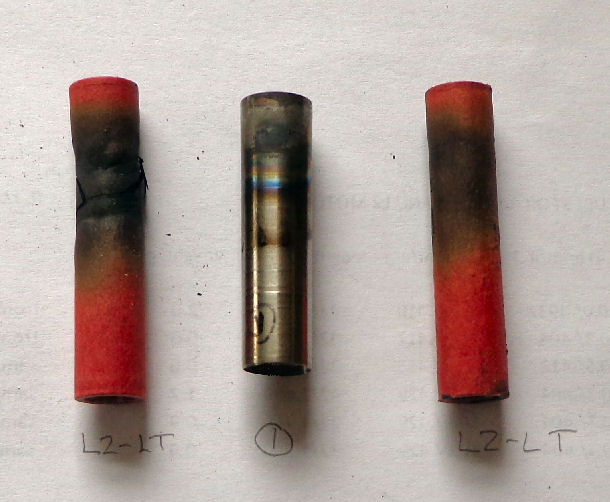 Above: The stainless steel (303SS) tube withstood L-2 blowouts.  The L-2 on the left was predrilled to ensure a 'blow out'.  Nasty.  The L-2 LT on the right is scorched but intact.

So far so good!

Rob had high hopes for the lighter alloy tubes.  He hoped their good conductivity would prevent them being melted.

This is the actual experiment with a prepared L-2: 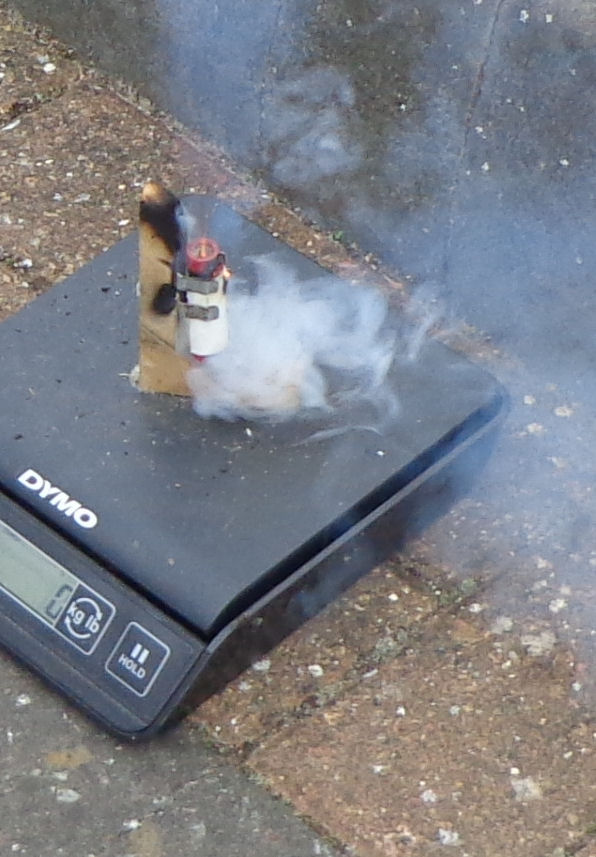 Above: The Rapier ignited easily, gave a good thrust (about 160 mN) then  a 'blow torch' flame on the right appeared.

And here's the alloy tube post-run: 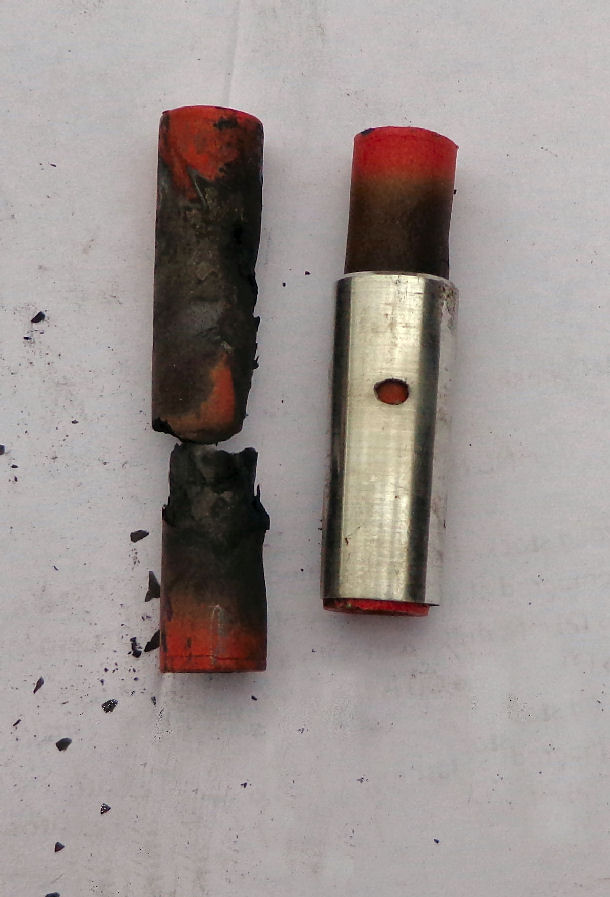 Above: The Rapier 'blow-out' has burned a neat hole through the alloy.  The model would not have been protected.

This was disappointing.  I then tried an alloy tube with L-1.  These motors are smaller.  But do they burn as hot as an L-2?  After two runs with prepared L-1s, this was the result: 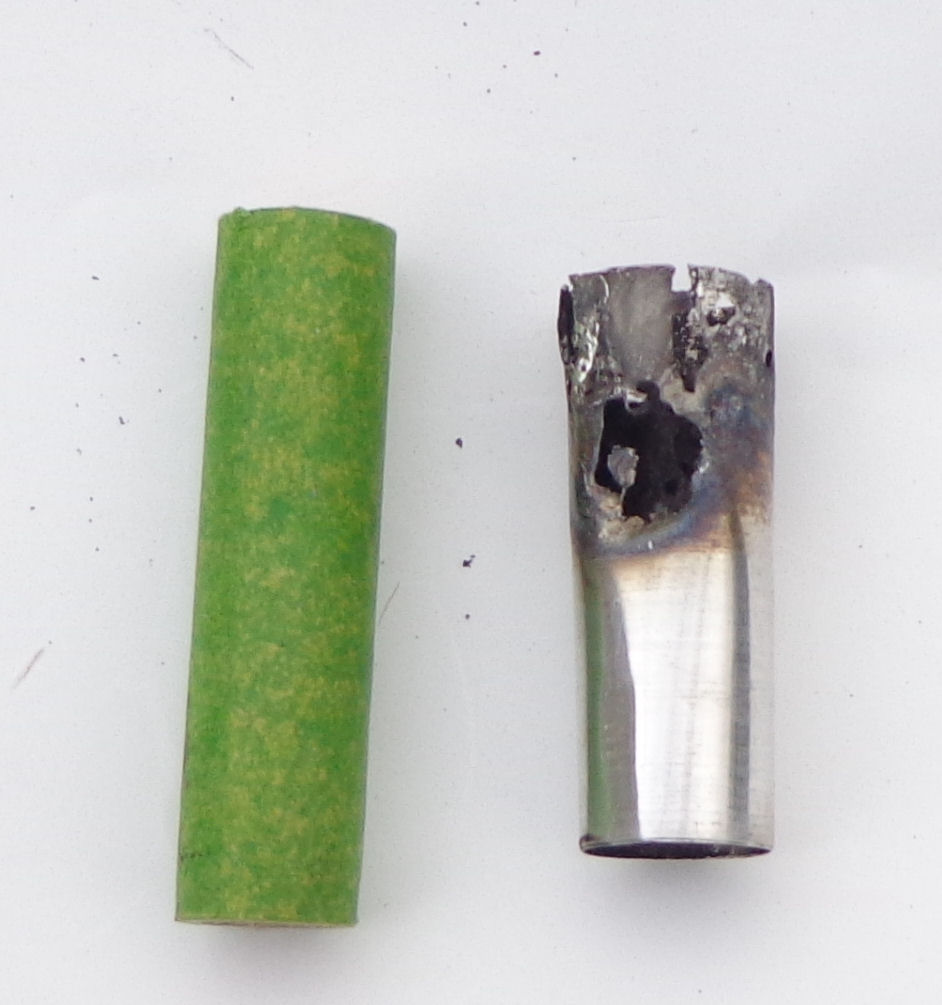 Above: L-1 alloy tube with a Rapier L-1 on the left.  The alloy (6061-T6 Al) has been melted through.  This implies the Rapier burns hotter than 550 degrees Celsius.

Conclusion: no scientific experiment is a 'failure' if it gives a clear result.  In this case it is: alloy is not effective; stainless steel is the way to go.  A layer of ceramic tape around a stainless steel tube  will be needed to protect a model from the high temperatures.  I think we can live with the extra 2g weight.

My thanks must go to Rob for making and posting these tubes.

As an aside, turning to the actual models:

I have been protecting my profile models with self adhesive metal tape behind the motor: 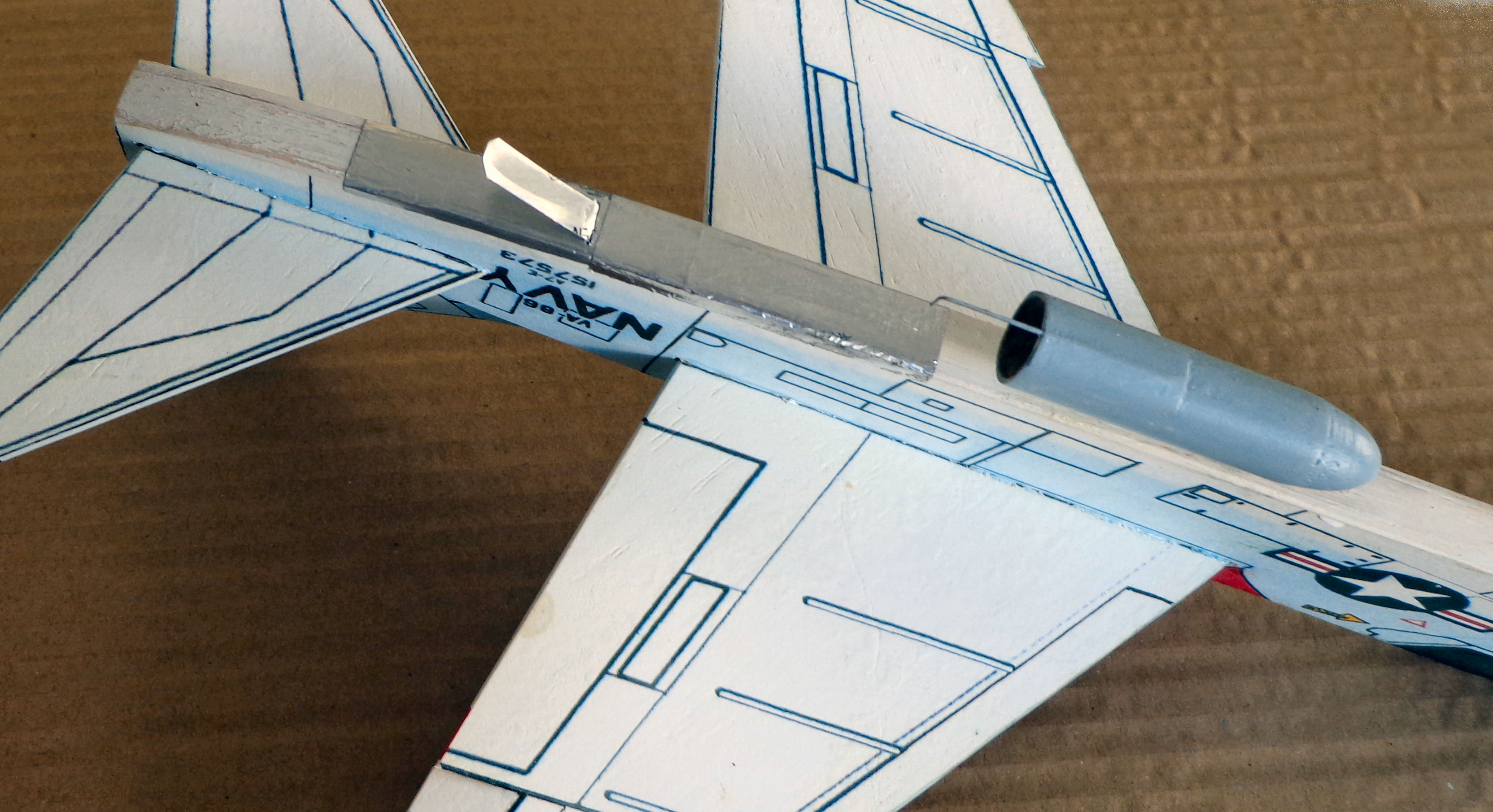 Above: The Corsair II ready for its maiden flight.  Note the metal foil and the down-thrust tab (made from the thin metal off a coffee can top).

Caution: (red alert!) The self-adhesive metal tape currently sold by, for example Halfords (in the UK) is too thin.  This stuff is far better: 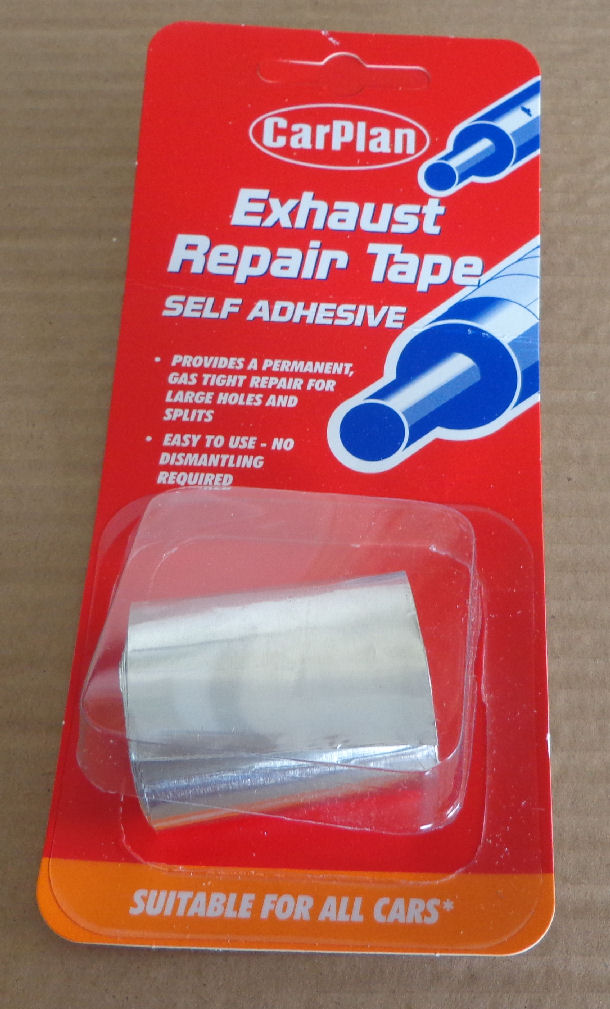 Above:  this works fine for me.  Available on eBay.

I look forward trying out ceramic mounting tubes, and trying a stainless steel Rapier mounting tube in a model.