Ducted fans to power scale jet models have been around since the early 1960’s and Veron’s kits and Impellers fetch high prices on eBay.  The Fairy Delta 2, especially is still a sought-after plan.  But most the i/c motors of the age were never comfortable at the high speeds ducted fans required, (Phil Smith confessed his FD2 was little more than a 'powered glider') and even though there were a number of successful semi-scale plans and model kits (like the Telasco Skyray) it was a specialist niche  and was never going to be very popular.

Electric motors are much more comfortable at high revs ducted fans require: Stephen Glass showed the way EDF (electric ducted fan) was going to go years ago.  Motors got smaller and more powerful, batteries became lighter, and suddenly, it seemed, kits like Aerographic’s 20" span Hunter with a KP fan, controller and LiPo batteries became a viable prospect for the average modeller.  (And I very much include myself in this category).

Expert modellers like Steve Bage were quickly off the mark  and his MiG 17 is a fine of example what could be achieved with the new technology:

Above: Steve Bage's sophisticated Mig-17 for an internal 32mm KP EDF unit.  Note the paper-lined jet pipe.  Beautifully built, this model also featured 'R/C guidance', and was, alas, lost in a flyaway.  The plan can be supplied on request.

Chris Richards has demonstrated his less ambitious but eminently practical Depron La-17, which has an internal 24 mm fan, to me several times: 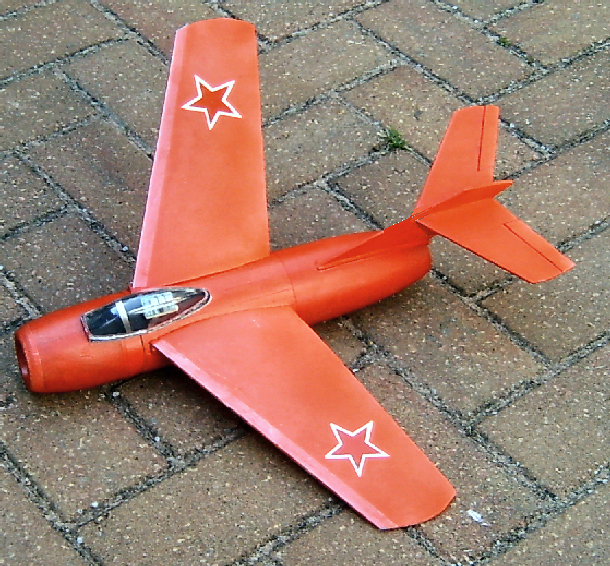 Above: Chris Richard's LA-17, built as a 'proof of concept' for unbelievers like me.  Flies OK in a steady fashion, but has a liking for trees!

A very nice EDF version of the Telasco Skyray was also flying at Old Warden recently (sorry, no photo!).

But I remained curiously unmoved by these models – yes they flew ‘free flight’, and pretty well, but they were bigger  than the Keil Kraft and Jetex ‘Flying Scale’ models of my youth and somehow didn’t ‘hit the spot’.

What I craved was a little EDF the size of a Jetex 50 that would fit in the trough of an old Jetex model.   The good news is that the redoubtable Derek Knight in the UK  has developed such a unit: 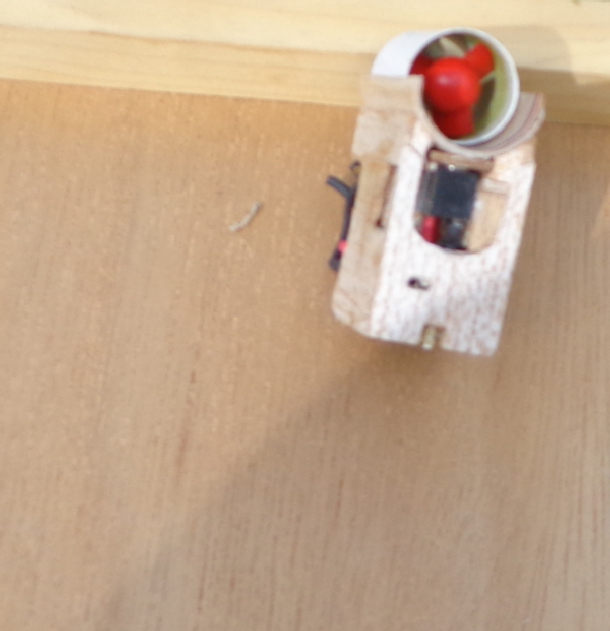 Above: Derek's prototype of his miniature EDF unit.  The package is 'all in one' containing motor, fan, controller, timer and batteries.

The complete package will cost perhaps as much as four packs of Rapier L-2's.   The bad news is that the package – motor, fan, timer, and speed controller is not due for release for some months.  But it will be worth the wait!

Derek showed off his new EDF 'power train' at Old Warden recently, and made several nice sorties with his Skyleada Mystère: 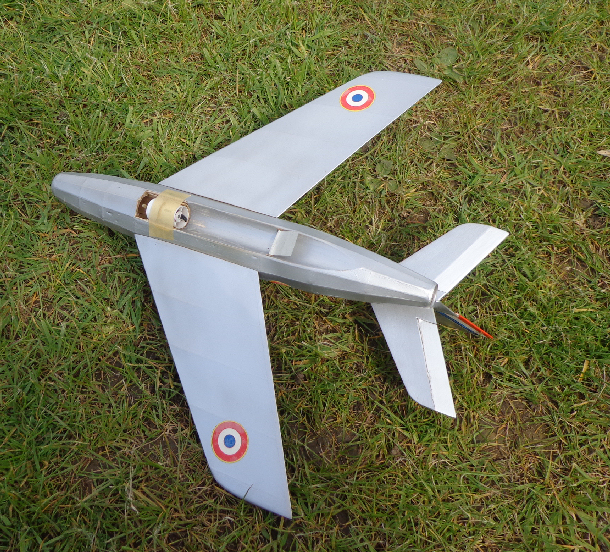 Above:  Derek's Mystere is built exactly as the Skyleada kit of sixty years ago.  It's a bit heavier, but the  wing area can handle this.  The EDF unit fits in the Jetex trough.  Note the thrust tab.  The EDF makes an interesting jet like whine in the sky.

The flights, short as they were, were  impressive: this was a ducted fan model I could (at last!) be interested in.  It is certainly the ‘right size’ for me, and the fact the complete ‘power train’ will just slot in an established model will mean the transition from rocket power to fan power should be relatively painless.

Now the model(about 65 grams) is (at present) about twice the weight of a Jetex model (say 30-35 grams) but the thrust of the fan (up to 40 grams) is more than sufficient to give a nice climb out and a quite fast circling flight at about 30 feet.

OK, where’s the brisk acceleration, the smoke, the excitement and unpredictability of Jetex or Rapier?

But the very lack of a chaotic flight pattern makes EDF less traumatic, and will suit some temperaments.  It will also make some ambitious scale projects – a Bristol 188 or a French Trident, models one would hesitate to put a Rapier of uncertain specification in – more attractive. 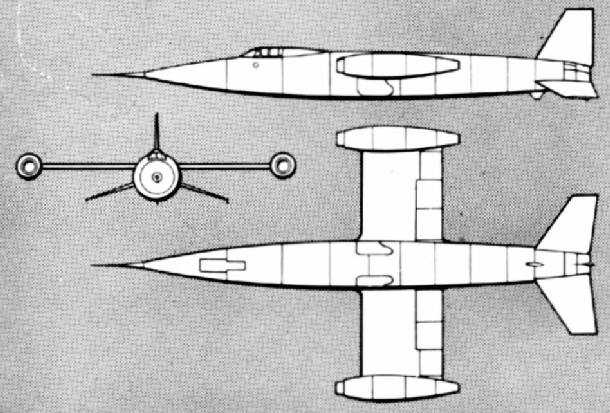 Above:  the interesting Trident - two small jets on the wing tips and a rocket in the fuselage.EDF enables ambitious jet models to be contemplated without fear of an uncertain power supply.

Now here’s an exciting possibilty ,  A Trident with two 18 mm ducted fans on the wing tips could be launched into the sky with confidence.  At height a Rapier L-2 in the fuselage could be lit …. Just a thought! 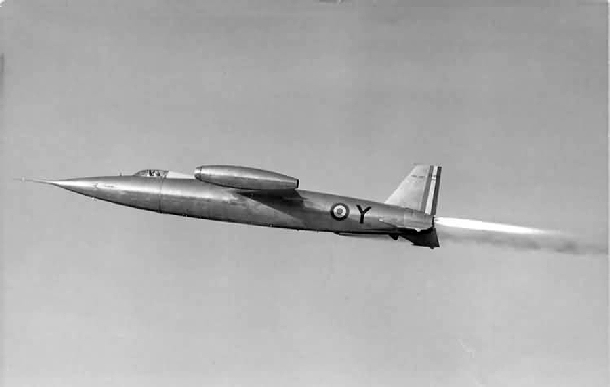 To conclude: If Derek's plans come to fruition, we should soon  have an alternative means of flying those old evocative Keil Kraft, Veron and Skyleada Jetex models.  But, as I said, Derek’s package is still under development, so please be patient. 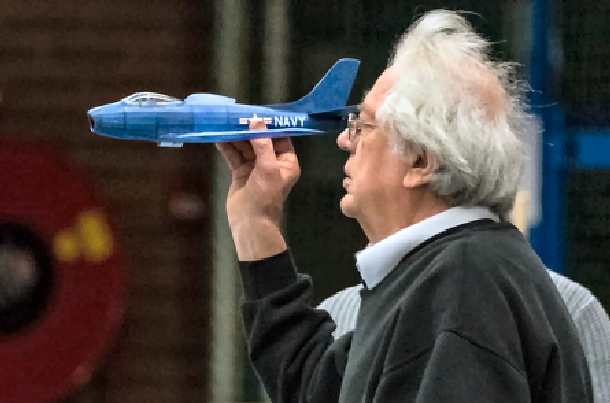 Above: Derek with his Keil Kraft Sabre (coloured as a 'Fury', very nice) built without modification.  Note the tiny EDF unit in the trough where the Jetex 50 went.  It is a bit heavier than one with a Jetex or Rapier, but, by adding another battery, you can up the watts and have a bit more thrust to play with.